How to build a pergola?

Your mind is made up! You've decided to install the pergola of your dreams to protect yourself from the elements and the sun's rays. To do this, there are several solutions available to you. You can build it yourself or use the services of a pergola manufacturer. The choice will depend on how much time you have available, as well as your budget and your DIY skills. So, how do you go about building a pergola? Which materials are better?

Plan ahead before starting to build a pergola

If you're planning on building a pergola in your garden, you probably have a clear idea of what you want it to be like. The first thing to do then is to create a sketch of your idea. You can do this yourself, or ask a professional to do it for you. Either way, even if you are still hesitating between building the pergola yourself or going through a manufacturer, this sketch will be useful when it comes to choosing materials or estimating its cost. There are two types of pergolas:

Once the plans have been made, you need to prepare the ground.

When you have determined the length of your pergola, you can mark out the surface area to be sheltered in your garden. A pergola is mainly made up of posts (four for a freestanding pergola, two if it's wall-mounted), a roof and elements such as the screws, angle trims, corner connectors and gutters. Start by marking out the surface area of the pergola as well as the place where the posts will be. You then need to dig holes deep enough to hold ¼ of the length of the posts. Start to build your pergola by fixing the posts using post supports or a mortar mixture. Then, check that the feet haven't moved with the aid of a spirit level and a guiding line. If the posts of your future pergola are not all the same level, you can readjust them by sawing the longest. If you have opted for a wall-mounted pergola, you need to fix a plank to the wall of the facade. You then need to screw other planks on each side of the posts and between them both to hold them together. For a freestanding pergola, you need to do the same thing on each side, without fixing it to the house. You just then need to assemble the crossbeams perpendicular to the planks. Once the pergola is built, you can add a gutter to collect the rainwater and polycarbonate panels for the roof for example.

The main materials for building your pergola

The choice of material of the structure and the roof is not only a matter of aesthetics. The amount of time you have and your budget are essential criteria in your decision-making. If you choose to build a wooden pergola, it will require careful and regular maintenance. Aluminium is one of the cheapest materials on the market. It requires little maintenance and has a very contemporary look. For the roof, it is preferable to use polycarbonate as mentioned above. The panes are extremely resistant to UV rays and are easy to install. You will also need an edge and edge profiles in order to give a neat finish to the roof and a glazing bar to join the panes together. Once in place, you just need to furnish and decorate your pergola, maintain it and enjoy it with your family and friends! Are you hesitating between installing your pergola yourself or using a manufacturer? We can provide you with a free quote!

What slope for a pergola?

Do you have a project for a pergola and are wondering what slope to choose? Learn about the criteria for slopes as well as the differences between sloping and horizontal roofs.
Read more
Build

What to put on the roof of a pergola?

Do you wish to install a pergola and wonder how to fit out the roof? Here's how to choose its cover and the materials to use.
Read more 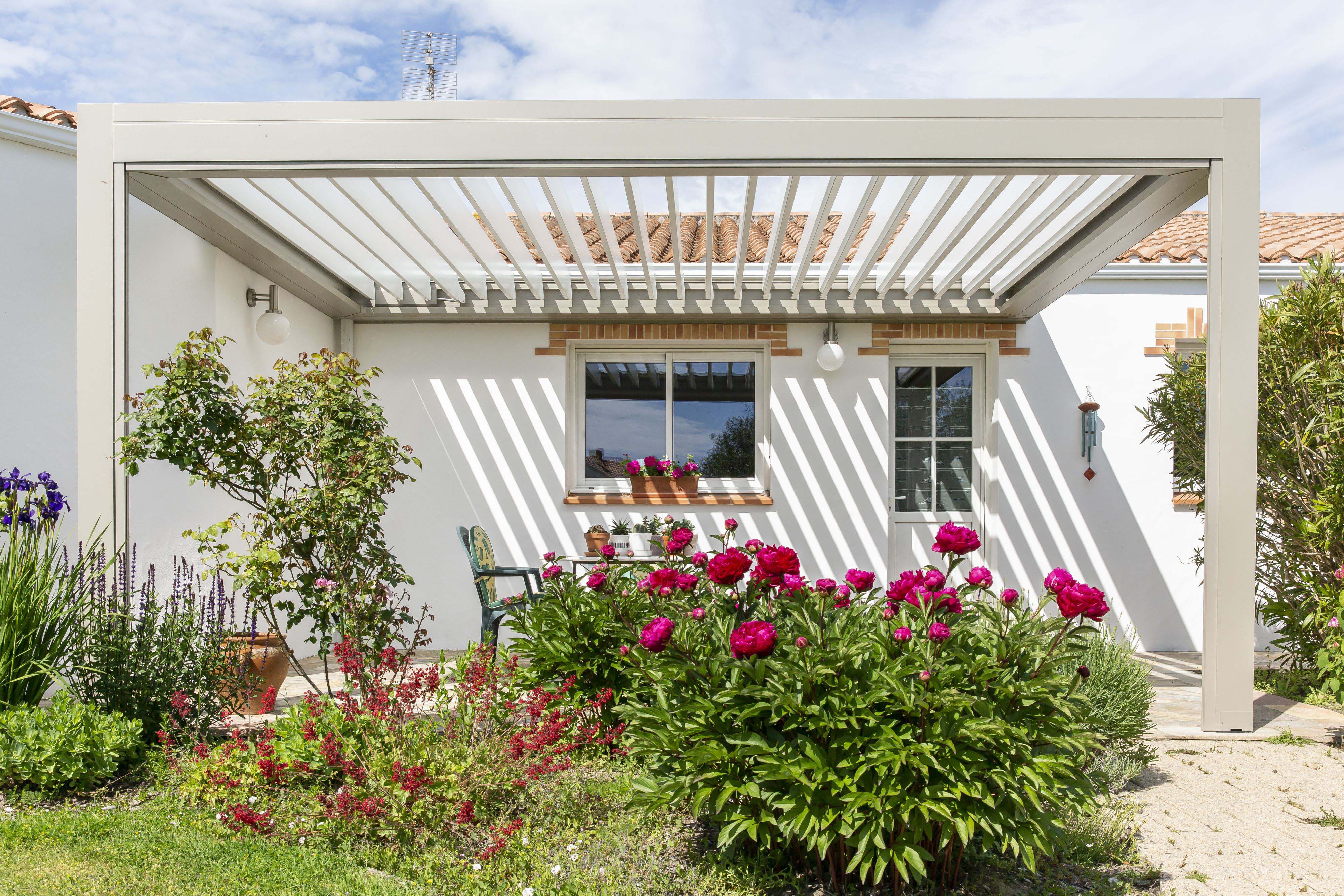 How to close a pergola?

Are you hesitating between a conservatory and a pergola? Have you asked yourself whether it is possible to close a pergola? Choose an upgradable pergola and discover our blinds and picture windows.
Read more

AKENA, at your side for your project